Can you guys please pray for my family protection, health, peace, salvation, God’s mercy, grace, compassion, needs to be met.

Just say Lord i pray for this girl’s family for her father, mother, sibling and grandmas.

I thank you in Lord Jesus name.

I pray for you and your family.

I have known my Lord for more than fifty years and

there is not one instance that  I have failed to have an audience with the King.

Here’s one story about George Muller

“While you say it can’t be done, somebody is doing it.

Have faith in God who can make impossible things possible”

After these events, King Xerxes honored Haman son of Hammedatha, the Agagite, elevating him and giving him a seat of honor higher than that of all the other nobles.

All the royal officials at the king’s gate knelt down and paid honor to Haman, for the king had commanded this concerning him.

But Mordecai would not kneel down or pay him honor.

Then the royal officials at the king’s gate asked Mordecai, “Why do you disobey the king’s command?”  Day after day they spoke to him but he refused to comply. 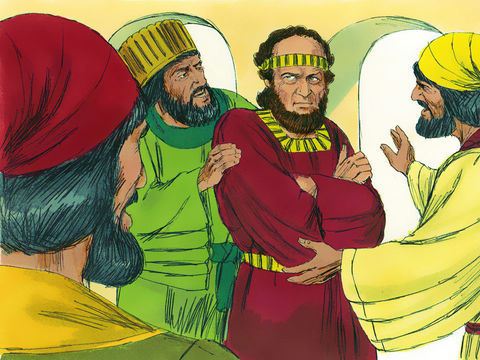 Therefore they told Haman about it to see whether Mordecai’s behavior would be tolerated, for he had told them he was a Jew.

When Haman saw that Mordecai would not kneel down or pay him honor, he was enraged.  Yet having learned who Mordecai’s people were, he scorned the idea of killing only Mordecai.

Instead Haman looked for a way to destroy all Mordecai’s people, the Jews, throughout the whole kingdom of Xerxes.

Then Haman said to King Xerxes, “There is a certain people dispersed among the peoples in all the provinces of your kingdom who keep themselves separate.

Their customs are different from those of all other people, and they do not obey the king’s laws; it is not in the king’s best interest to tolerate them. If it pleases the king, let a decree be issued to destroy them, and I will give ten thousand talents of silver to the king’s administrators for the royal treasury.” 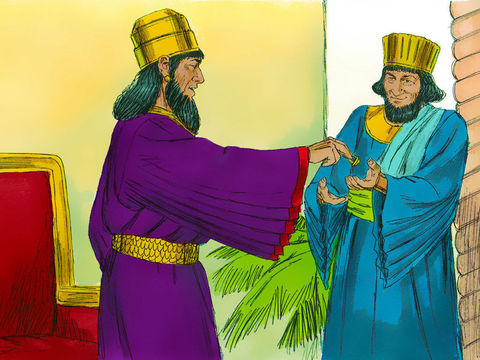 So the king took his signet ring from his finger and gave it to Haman son of Hammedatha, the Agagite, the enemy of the Jews. “Keep the money,” the king said to Haman, “and do with the people as you please.”

Then on the thirteenth day of the first month the royal secretaries were summoned. They wrote out in the script of each province and in the language of each people all Haman’s orders to the king’s satraps, the governors of the various provinces and the nobles of the various peoples.

These were written in the name of King Xerxes himself and sealed with his own ring. 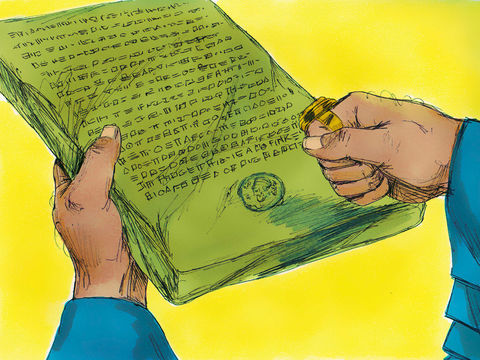 the order to destroy, kill and annihilate all the Jews—young and old, women and children—on a single day, the thirteenth day of the twelfth month, the month of Adar, and to plunder their goods.

A copy of the text of the edict was to be issued as law in every province and made known to the people of every nationality so they would be ready for that day.

The couriers went out, spurred on by the king’s command, and the edict was issued in the citadel of Susa. The king and Haman sat down to drink, but the city of Susa was bewildered.

Later when King Xerxes’ fury had subsided, he remembered Vashti and what she had done and what he had decreed about her.

Then the king’s personal attendants proposed, “Let a search be made for beautiful young virgins for the king. Let the king appoint commissioners in every province of his realm to bring all these beautiful young women into the harem at the citadel of Susa. Let them be placed under the care of Hegai, the king’s eunuch, who is in charge of the women; and let beauty treatments be given to them. Then let the young woman who pleases the king be queen instead of Vashti.”

This advice appealed to the king, and he followed it.

Now there was in the citadel of Susa a Jew of the tribe of Benjamin, named Mordecai son of Jair, the son of Shimei, the son of Kish, who had been carried into exile from Jerusalem by Nebuchadnezzar king of Babylon, among those taken captive with Jehoiachin king of Judah.

Mordecai had a cousin named Hadassah, whom he had brought up because she had neither father nor mother. This young woman, who was also known as Esther, had a lovely figure and was beautiful. Mordecai had taken her as his own daughter when her father and mother died.

When the king’s order and edict had been proclaimed, many young women were brought to the citadel of Susa and put under the care of Hegai. Esther also was taken to the king’s palace and entrusted to Hegai, who had charge of the harem.

She pleased him and won his  favor. Immediately he provided her with her beauty treatments and special food.

He assigned to her seven female attendants selected from the king’s palace and moved her and her attendants into the best place in the harem.

Esther had not revealed her nationality and family background, because Mordecai had forbidden her to do so. Every day he walked back and forth near the courtyard of the harem to find out how Esther was and what was happening to her.

Before a young woman’s turn came to go in to King Xerxes, she had to complete twelve months of beauty treatments prescribed for the women, six months with oil of myrrh and six with perfumes and cosmetics.

When the turn came for Esther (the young woman Mordecai had adopted, the daughter of his uncle Abihail) to go to the king, she asked for nothing other than what Hegai, the king’s eunuch who was in charge of the harem, suggested.

And Esther won the favor of everyone who saw her.

She was taken to King Xerxes in the royal residence in the tenth month, the month of Tebeth, in the seventh year of his reign.

So he set a royal crown on her head and made her queen instead of Vashti.  And the king gave a great banquet, Esther’s banquet, for all his nobles and officials.

He proclaimed a holiday throughout the provinces and distributed gifts with royal liberality.

When the virgins were assembled a second time, Mordecai was sitting at the king’s gate. But Esther had kept secret her family background and nationality just as Mordecai had told her to do, for she continued to follow Mordecai’s instructions as she had done when he was bringing her up.

During the time Mordecai was sitting at the king’s gate, Bigthana and Teresh, two of the king’s officers who guarded the doorway, became angry and conspired to assassinate King Xerxes.  But Mordecai found out about the plot and told Queen Esther, who in turn reported it to the king, giving credit to Mordecai.  And when the report was investigated and found to be true, the two officials were impaled on poles. All this was recorded in the book of the annals in the presence of the king.

Grace means undeserved kindness. It is the gift of God to man; the moment he sees, he is unworthy of God’s favor.”

During the night the mystery was revealed to Daniel in a vision.

Then Daniel praised the God of heaven and said:

“Praise be to the name of God forever and ever;
wisdom and power are his.

He changes times and seasons;
he deposes kings and raises up others.

He gives wisdom to the wise
and knowledge to the discerning.

He reveals deep and hidden things;
he knows what lies in darkness,
and light dwells with him.

I thank and praise you, God of my ancestors:
You have given me wisdom and power,
you have made known to me what we asked of you,

you have made known to us the dream of the king”

Follow GLORY TO GOD Blog on WordPress.com
Join 374 other subscribers

5: An insight into heaven